The second generation of the SEAT Leon Sportstourer was unveiled alongside its compact hatchback brother in the beginning of 2020 in Martorell, Spain.

even though it's based on a similar platform as the third-generation Leon, the new compact station wagon features plenty of modifications to ensure even higher levels of driving pleasure, better efficiency from its available powerplants and more safety features.

A lot more infused with technology, the second-generation SEAT Leon ST is the Spanish carmaker's first fully connected car alongside the regular Leon, with the infotainment system offering Android Auto and wireless access to Apple CarPlay and various in-car apps. Just like on the regular compact, the model's data, charing status or air conditioning system can even be accessed remotely through a smartphone app in the case of the plug-in hybrid version. A host of powertrains are available, from gasoline, diesel and Compressed Natural Gas (CNG) to mild-hybrid (eTSI) and plug-in hybrid (eHybrid versions. The new Leon Sporttourer is 93 mm longer, 16 mm narrower and 3 mm lower than its predecessor. Thanks to various updates to the MQB platform, which is now called MQB Evo, the models also features a 50 mm longer wheelbase. The new design language not only makes the car look sportier but also allows a reduction of the drag coefficient of 8 percent compared to the previous generation. 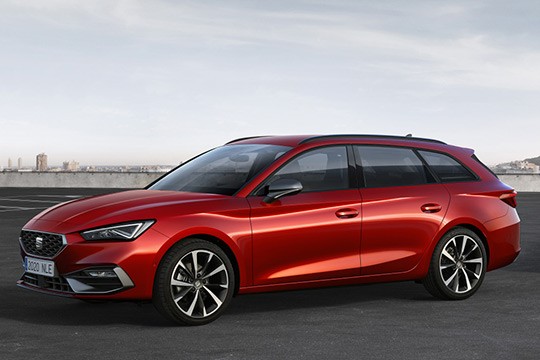