Scion, the youth-oriented Toyota sub-brand, introduced the second generation of the xB after almost four years on the market at the 2007 Chicago Auto Show.

It was all fine and well on financial markets in the early days of 2007, and carmakers were planning their products for the next decade. But that rush wasn't good for the Japanese carmaker, as it found out a decade later.

The xB's second-generation car featured a flat front fascia with a short overhang. The designers created a mesh-grille on the upper side and an additional air-intake on the lower side of the bumper, flanked by two slim and vertical cuts that mimicked a pair of side-scoops for cooling the brakes. The darkened A and B-pillars, and a thick C-pillar, gave the car a more robust image on the market. At the back, a slightly curved vertical liftgate ended the vehicle.

Inside, the longer wheelbase allowed the car to accommodate up to five occupants. Its front, high-mounted bucket seats were separated by a folding armrest for the driver. The dashboard featured a center-mounted instrument cluster with three analog dials and two LCDs: one for the onboard computer and the other for the speedometer. Thanks to its customization program, the buyers could have their vehicle almost tailor-made with a wide range of options, including interior color combinations, upholstery, and trims.

Under the hood, Toyota installed a 2.4-liter inline-for engine carried over from the Camry's first generation. The carmaker paired it with either a five-speed manual or with a four-speed automatic. 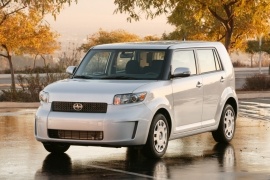