The 2016 Scion iM is a mix of Toyota Auris hatchback along with sporty bits, creating a more attractive vehicle for the younger generation.

That’s how the iM camewith slightly different headlights, a new sportier front bumper, new upper grille, bigger side sills, a revised rear apron and redesigned rims. Apart from the emblem on the steering wheel and the software running on the infotainment screen, the interior was the same as the Auris.

Power came from a 1.8-liter gasoline engine tuned to offer both fun and decent fuel economy. The engine developed 127 hp and was mated to a 6-speed manual or a CVT gearbox.
The iM was not a quick car as you would’ve expected it to be due to its looks, and that’s because it was a heavy car, weighing 3,000 pounds.


The car was equipped with 17-inch alloy wheels and had a pretty good grip due to the relatively wide tires.
The interesting fact about the iM was that it was offered in a single trim, standard features included power-folding heated mirrors, dual-zone automatic climate control, keyless entry, Bluetooth, cruise control, an USB port, AUX function and a 6-speaker Pioneer audio system. Pretty nice!

To boot, if you miss the Toyota Matrix, the Scion iM was the perfect replacement you could get, especially in that new metallic blue shade. 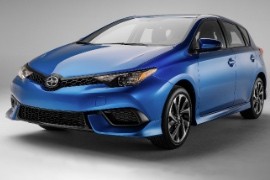