General Motors tried to keep the Saturn brand alive and introduced the Astra on the North American continent in January 2008, but that was not enough.

Developed mainly for the European continent, the Astra was a nameplate used by Opel and Vauxhall. It was available in a few shapes. On the other hand, Saturn took only the three- and the five-door version for the U.S. market. The latter was also featured in the Transformers movie series, but that couldn't help the young brand survive the economic crisis.

In Europe, the Astra was already on the market since 2004, but it took GM some time to unveil it at the NAIAS 2008. The American version came with a simpler design, featuring fewer aerodynamic sculptures on the front bumper. Yet, the V-shaped front bumper and apron were kept, along with the side-scoops for the foglamps. Moreover, a Saturn-specific chromed slat adorned the grille.

Inside, apart from the steering wheel and the badge, everything was carried over from the European Astra. Fortunately, that came with the zero-gravity seats that customers appreciated on longer trips. But the car provided everything a regular driver needed, such as power windows and locks, AC, and a decent stereo. Moreover, an infotainment system was available as an option. However, it wasn't as performant as the one installed on its European sibling.

Under the hood, GM installed a 1.8-liter gasoline engine that provided a healthy 140 ponies, which were just enough to move a family around a city. 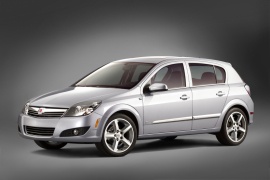