With a license to build a Land Rover in its portfolio, the Spanish carmaker Santana kept that model alive until Iveco bought them and transformed the car into an Iveco Massif.

The Metalirgica de San Ana S.A. Bought a license for the Land Rover Series II in 1958 and built it from Complete Knock-down kits (CKD). After the British brand ended the series, Santana made the panels and continued building the car in all shapes and sizes, with a long or short wheelbase, a pickup, or a closed body version. The PS10 Shortline was the short wheelbase version with two doors and five seats.

That said, the Santana PS 10 was, in fact, a well-built Land Rover Series III, which was the predecessor for the Defender. Its straight lines, body panels, and doors were similar to the Land Rover Series III. Still, it featured dual round headlights instead of single ones. The rear passengers could have slide-open the side windows to get more fresh air. Santana installed vertical taillights instead of small, round ones found on the Defender or Series III.

Inside, the PS 10 Shortline offered a pair of seats at the front and a folding bench in the rear. For the dashboard, the carmaker installed an instrument cluster that sported a big dial for the speedometer flanked on the sides, in individual clusters, by the tachometer on the left and a pair of gauges on a common dial on the right. Between the front seats, the carmaker offered an armrest as an option.

Unlike the Defender, which was already an all-wheel-drive vehicle, the Santana remained a 4x4 vehicle with low range gear and leaf springs. That made it less comfortable but a very tough, rugged vehicle. 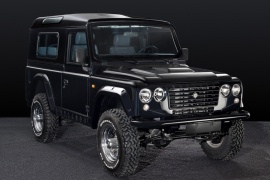