The Spanish carmaker Santana built a licensed Land Rover in the late '50s, and they kept producing updated versions until Iveco purchased them.

In 1958, Land Rover sent complete knock-down kits (CKD) in Spain to be assembled as Land Rover by the Metalurgica de Sant Ana S.A. After the Land Rover Series II stopped, the Spanish factory continued to assemble the Series III, but with some minor improvements. Later on, Santana built its vehicles from scratch but based on the Land Rover parts. It was an agreement between the two companies, and the Spanish carmaker ended up with a license for the Series III.

That said, the Santana PS 10 was, in fact, a well built Land Rover Series III, which was the predecessor for the Defender. Its straight lines, body panels, and doors were similar to the Land Rover Series III. Still, it featured dual round headlights instead of single ones and vertical taillights instead of small, round ones found on the Defender or Series III. The pickup-truck version kept the same short-wheelbase from the Series III, with a slightly extended cabin so the driver and its passenger could adjust their seats. Some versions were fitted with three seats at the front, although the middle passenger should figure out how to avoid the transmission and gear-levers.

Unlike the Defender, which was already an all-wheel-drive vehicle, the Santana remained a 4x4 vehicle with low range gear and leaf springs. That made it less comfortable, but a very tough, rugged vehicle. 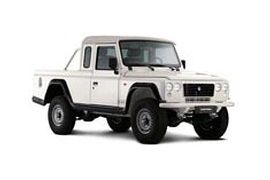