Within the Renault-Nissan Alliance, some models were wearing different badges, depending on the markets they were sold.

This is the case for the Samsung SM5, which is actually a rebadged Nissan Maxima. It had only two engine versions, a 2.0-liter inline-4, and a 2.3-liter V6. Those had 136 hp for the smaller engine and 171 hp for the latter.

Despite being a front-engined car with front-wheel-drive, it had a center tunnel that made the vehicle more like a four-people car than a five-seater. The 4.9 meters (16 ft) model had relatively enough room for the rear passengers. It was equipped only with automatic transmissions, a 4-speed for the smaller engine and a 5-speed for the other.

Its main advantage was the comfortable suspension. The car was sold mainly in east-Asia and some African countries. It didn't receive the whole lineup of engines available for the Maxima. The performance was good enough, but the big turning radius was considered a design flaw for the vehicle. This was a compromise did for a big wheelbase, of 2.77 m (9 ft).

The top version featured leather seats and an automatic climate control system. It was produced only for four years, afterwhich the SM5 was replaced with a Renault-based platform used for the European Renault Talisman. 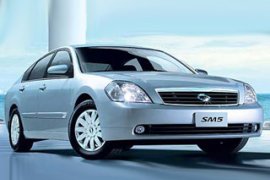