This is how the SM started.

It was the first generation of the SM5 model, a vehicle wanted by the Koreans to give a touch of elegance and luxury. The SM5 was based on the Nissan Maxima's fourth generation (A32), which was replaced in 1999 by a newer generation.

From the outside, the SM5 took the relatively outdated design and installed a new badge on it. So, at least, that was brand new, but the car had the same landscape-type rectangular headlights with rounded edges, a typical design for the Japanese cars of the early '90s. A flat hood and a boxy design for the sides completed the exterior look.

But if the design was so '90s, we could had hoped that the suspension would have been the same. Unfortunately, it wasn't. The third generation of the Maxima had a rear independent suspension, but since Nissan needed to cut down costs, for the fourth generation it replaced it with a torsion beam, semi-rigid type. It is the same suspension used by Samsung for its mobile executive sedan.

Under the hood, Samsung sold the SM5 with the 2.0-liter engines in Korea by naming them SM 520, which sounds very BMW-ish. The same story was with the V6 3.0-liter versions, which were named SM 530. 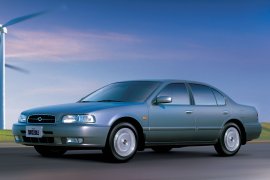