While it was still under GM's control, Saab introduced a new generation of the 9-3 in 2002, while in the following year, it unveiled the convertible version.

Even though the 9-3 was not available as a coupe, the carmaker decided to build a convertible version for this lineup, besides the sedan and the station wagon. It was heavier than its siblings and was less fuel-efficient than those. Still, it achieved its objective: to offer a more pleasant driving experience.

The new front fascia was already established by its siblings, but it was slightly enhanced, raising the production costs and driving GM's execs mad in their Detroit offices. Nevertheless, though, the car looked both elegant and sporty. Its tilted headlights and specific grille that resembled an aircraft were accompanied by a lower apron with an extended lower lip. That was not added there just for aerodynamic purposes but also to enhance pedestrian protection. Saab was a brand focused on safety. From its profile, the thick A-pillars were the only ones that had to protect the occupants in an unlikely event of a roll-over accident. Behind the cabin, a hardcover protected the canvas roof when retracted and featured a pair of bulges. At the back, depending on the trim level, the 9-3 Convertible featured a small lip spoiler on the trunk's lid.

Inside, the leather-wrapped interior was standard for the upper trim level. The front bucket seats provided enhanced side support thanks to the high-bolstered areas. However, even though it was advertised as a convertible with four seats, the rear passengers were not very happy with the legroom provided. Last but not least, the trunk was not that spacious either.

Under the hood, Saab installed a choice of engines from its own basket or carried over from General Motors, such as the turbo-diesel units. 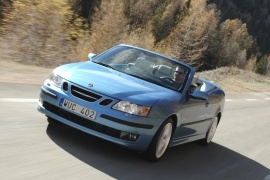