The Saab 9-3 range was introduced in 1998 as a successor of the 900 series. It was offered as a hatchback, a coupe, and a convertible. It was developed and produced under GM management.

Even if there are not so many days to drive with the top down in Sweden, the Swedish company built convertibles since its first model, the 92 (1952), which featured a textile roof (also known as cabrio-coach vehicles). Unlike its ancestors, the 9-3 was a true convertible.

The 9-3 featured the same front design as its coupe sibling, but it didn't have the sloped trunk-lid or, at least, not as obvious. Since the car shared its platform with the Opel/Vauxhall Vectra, it had to use some of its components. The wide headlights and the specific trapezoidal grille decorated the front fascia. The raked A-pillars were thick and served as a safety roll-over protection. With its ascending beltline, the engineers stated that if the car was upside down, the occupants had a big chance to survive if the seatbelts were used. Saab was the first car-maker to fit that safety device in the world and gave the rights to use it for free to all car-makers.

Inside, the Saab tried to compete with the premium vehicles. Its dashboard was big and the center stack took its inspiration from the aircraft industry. A “Night Panel” function was carried-over from its bigger brother, the 9-5. Once activated, the entire instrument panel was shut down and left only the speedometer lit.

For the engine-compartment, the 9-3 Convertible was offered with a wide choice of gasoline engines, most of them being turbocharged. The standard transmission for the entire range was a 5-speed manual while a 4-speed automatic was available. 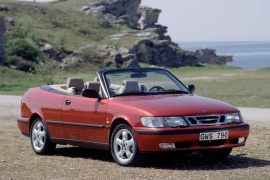