Saab used its former 900 Convertible underpinnings when it made the 9-3 Convertible since GM owned them for barely a year before the car was unveiled.

The Swedish carmaker was a surprising star in the open-top vehicles market since it was not a warm country. Despite all odds, Saab managed to create a different convertible, and its customers were happy with that unique look and feel. GM tried to make the brand more profitable and understood that the open-top version was a good deal, so it gives them the green light.

At the front, the Saab-specific headlights with their swept design flanked the aero-inspired grille. Its front bumper sported a wider central grille on the lower side, flanked by fog lights. The raked windshield and the thick A-pillars were the only body elements that raised over the ascending beltline. Unlike other convertibles on the market, the 9-3 featured a high trunk, and the carmaker built the car, so in the event of a roll-over accident, the occupants' heads wouldn't touch the ground.

For the interior, Saab 9-3 featured the main company's characteristics such as the starter key between the seats, a big center console, and the "Night Panel" function that shut down all the unnecessary information during the night and let only the speedometer lit. Since the carmaker had to push the rear seats slightly forward to make room for the retractable roof, the legroom for the rear passengers was very minimal.

Under the hood, Saab installed its own designed 2.0-liter turbocharged engine. The carmaker offered it with either a five-speed manual or a four-speed automatic. 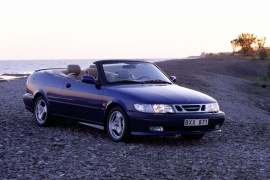