3 Rover-BRM: The Jet-Powered Car That Proved It Could Hang With the Big Boys at Le Mans

4 Mid-90s Hatchback Is Part Sleeper, Part Deathtrap With Over 500 HP per Ton

5 If the Range Rover Was a Coupe, This Is What It Would Look Like

Rover designed the 100 series as its entry-level lineup as a successor of the then defunct Austin Metro range and produced it under its own badge with a new nameplate since 1990.

The most important change was on the exterior, where the 100 received a refreshed bodywork with rounded corners and edges. As the world entered into a new design era, Rover adapted, and the 100 showed a new set of headlights with clear, corner-mounted turn signals. In addition, there was a choice of eight trim levels ranging from the 111 to the 114 GSi versions. The base model received steel wheels and rear washer-wiper, while the range-topping models featured light-alloy wheels and a small roof-spoiler atop the tailgate.

Inside, Rover tried to emphasize its luxurious past and provided the 114 with an option for a leather-wrapped interior, but most of its range featured fabric upholstery, cranked windows, and a cassette player fitted as standard. While the front bucket seats were slim and looked flimsy, the rear bench was as modern as it could for those times. In addition, it featured a fold-down system, thus enlarging the trunk area, which, otherwise, was good only for weekly shopping for one person.

Under the hood, apart from the gasoline, Rover-sourced, K-Series engines, the carmaker offered an option for two diesel versions carried over from Peugeot. 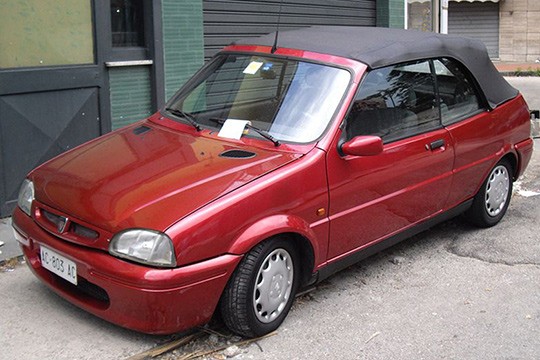