The Rolls-Royce Phantom III Sedanca de Ville was the last luxury vehicle that Henry Royce worked on and the last V-12 Rolls-Royce built until the 1998 Silver Seraph.

Built with majestic bodywork, the Phantom III Sedanca de Ville featured an exquisite bodywork built by the renowned coachbuilder Mulliner between 1936 and 1939. It showed the wealth of its owner and the power of its builder.

The Sedanca name came from Sedan and Cabriolet since the vehicle featured a closed bodywork for the rear passengers and a removable top for the driver area. The same bodywork was named De Ville by other carmakers, but Mulliner had its idea on how to name its products. With a tall and flat front radiator and the famous statue on top of it, the vehicle showed nothing more than opulence. Behind the cabin, the carmaker installed the trunk with an up-hinged lid.

Mulliner built the unusually high greenhouse so the owner could wear a tall hat while comfortably seated in the back. Inside, the coachbuilder installed a comfortable leather-wrapped bench in the back, with side armrests. As an option, the carmaker offered a wooden minibar in front of the rear seats.

Under the hood, the 7.3-liter V-12 engine was an engineering masterpiece for those times. It featured hydraulic tappets and a twin-spark ignition system (two ignition coils and 24 spark plugs). But the system proved to be less reliable, and starting with 1938, the carmaker installed regular, adjustable tappets. 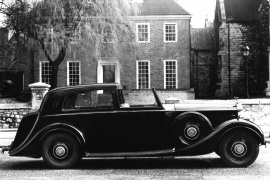