Rolls-Royce introduced the Phantom II in 1929, and the carmaker didn't intend to make it with a short-wheelbase, but one year later, it reconsidered that option.

Rolls-Royce Phantom II proved to be a highly successful model, and the British car manufacturer managed to sell 1,680 chassis, from which 281 were with Continental, short-wheelbase versions. Their bodyworks were built by various coachbuilders from the U.K., and the Barker&Co was the one that put a sports one, with four doors. The Phantom II Continental was the last built under the personal supervision of Henry Royce before its death in 1933.

When Rolls-Royce built the new car, it made it on a new low-slung frame with the radiator set well back. This allowed the coachbuilders to make sleeker bodyworks, and Barker took advantage and created a bodywork with a raked windshield and a short rear end. At the front, the car featured two headlights mounted on the wheel-fenders. The Phantom II was the first Rolls-Royce to sports 11 degrees tilted louvers on the engine compartment's sides. Since the Continental was more of a driver's car, the coachbuilder installed rear-hinged front doors to ease-up the ingress and egress and front hinged-doors in the back.

Inside, the cabin received special treatment, according to customer's requests, but they usually went for wood and leather combination. The carmaker installed a speedometer in front of the driver post and the rest of the dials and gauges in the middle on the instrument panel. The carmaker placed the glove-box on the passenger side.

Rolls-Royce made a new engine for the Phantom II. It received a cross-flow cylinder head and counter-weights for the crankshaft. With a Barker bodywork, the car was timed with a maximum speed of 92.31 mph (148.55 kph) by an independent tester. 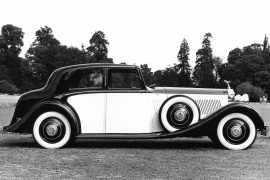