Rolls-Royce introduced the Phantom II in 1929 as the last of the 40/50 hp models, and it offered it with a choice of two wheelbases and a variety of bodyworks.

Like most luxurious carmakers from that era, Rolls-Royce signed a contract with exclusive coachbuilders renown for their products. In 1929, Rolls Royce appointed Park Ward to provide the bodyworks for the Phantom II. Due to the Wall Street crash of 1929 and the following years of The Depression, only 1,693 were built, and 281 were Continentals.

The short wheelbase versions of the Phantom II were named Continental since they were built for high cruising speeds on continental roads. Park Ward made a low greenhouse for the luxurious four-door sedan. It sported the same upright radiator at the front and a pair of big headlights. A third light was added as an option above the bumper. Its long and curved wheel-arches continued on the side-steps. The rear door was narrower, but that was fine; the car was built for the driver, not the rear passengers.

Inside, the customers could hand-pick the materials used, but the most often seen combination was with leather and wood. Some owners chose ivory and silk for side curtains. The dials and gauges took center stage of the dash panel. There were two individual seats at the front, while in the back, the coachbuilder installed a bench for three. Unlike the limousine, long-wheelbase versions, the Park Ward Continental II featured a shorter greenhouse. Behind the cabin, the coachbuilder installed the trunk, which was accessible only from the.

Under the hood, a 7.7-liter inline-six engine provided 120 hp. Thanks to the high gearing for the final drive, the car could sustain a higher speed for longer distances. The early models featured non-synchronous gearboxes, while the later models received a synchromesh system from the second to fourth gear. 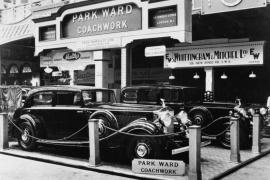