With two vehicles almost competing for the same customers, the Laguna and the Latitude, the French car-manufacturer Renault had decided to end both and introduced the Talisman range in 2016.

The Laguna was a successful model, but Renault was eager to enter into the Premium market. So, they launched the Talisman for the up-market but also to replace the Laguna range. It was based on the Renault-Nissan CMF-CD platform that was also used for the large MPV Espace. Renault promised to use only high-quality materials for the Talisman and to give their best efforts to make the car better in every detail than both the Laguna and the Latitude.

The exterior look was a proof of confidence, giving the big car a high-quality sensation, but differently than that offered by other European premium-car manufacturers. The headlights and the DRL were nicely integrated into the front bumper. For the rear of the car, it had the same "signature taillights" which were on the Megane Sedan.

Inside, there was plenty of room for the front passengers and a TFT display in the instrument cluster. The Renault R-Link 2 was available with connectivity to Android Auto and Apple CarPlay. But for the rear seats, there was less room and, strangely, not even one USB port. But, at least, it had one 12-volt socket. Other than that, it was a nicely done interior. 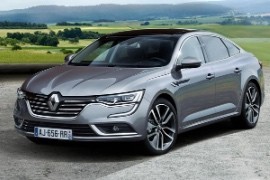