Renault introduced a facelift for Megane's second generation in 2006 and added new engines and an enhanced exterior.

The second generation of the Megane was a big success, and the carmaker tried to keep that trend going. Renault improved the safety systems, the car's look, and its powerplants for the facelifted version. The sedan version was very successful on the East European market and deserved notable credits for Megane's sales results.

By 2006, Renault had a new front fascia design concept, and it applied it to the entire range. Depending on the trim level, it featured black or body-colored moldings on the bumper and the sides, protecting the paint from minor bumps or door scratches in the parking lot. It used the same angular shape for the headlights but with new lamps and projectors. On the lower side of the front bumper, the carmaker installed round fog lights as standard for the entire range.

The interior showed a new navigation system designed together with TomTom. Its retractable screen on top of the dashboard was unique on the market, at least on the budget car segment. For the lower trim levels, the Megane featured standard air-conditioning and a decent CD radio.

Under the hood, Renault installed a choice of seven engines. Depending on the market, it offered a choice of manual or automatic gearboxes. 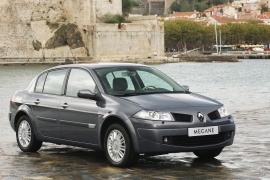