Renault introduced the second generation of the Megane in 2003, and it already knew what the market asked for a budget-car, and which were the customers' expectations from it.

The French carmaker built its compact segment contender in four shapes: hatchback with three and five doors, sedan, station wagon, and coupe cabriolet. The three-box version was designed especially for families and fleets.

Megane's second generation showed a clear understanding of the new-edge design trend. At the front, the angular and angled headlights were continued with a black grille in a wide V-shaped line. In the middle, Renault's rhomboidal badge matched the car's lines. With its clear edges across the hood and raked windshield, the Megane Sedan managed to be not too bold and not too bald either. The wide C-pillar and the curved rear windscreen created a fluid line toward the flat and straight trunk lid in the back. Its corner-mounted taillights were a cost-effective solution.

Inside, Renault managed to offer decent room for four people by limiting the front seats front and back travel. Thus, the driers taller than 1.90 m (6.2') had difficulties in finding a driving position. But since the average European size was around 1.75 m (5.7'), the carmaker didn't see that as a problem. Unlike most other carmakers on the market, Renault offered a keyless entry and start system with an RF card, which had to be pushed in a slot at the bottom of the center stack.

Under the hood, Renault installed powerplants ranged between 82 hp and 135 hp, both gasoline or turbo-diesel. Depending on the version, the carmaker paired them with a five or six-speed manual, while a four-speed automatic was available for selected engines. 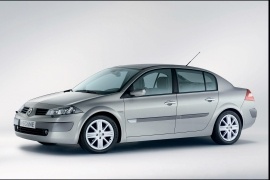