Offered with either a three- or a five-door bodywork, the Megane RS rocked the hot-hatch arena and became everyone's favorite back in 2004 when it broke the covers of the magazines.

Two years after the launch of the Megane's second generation, Renault made a surprising move and introduced a special version for it: the RS. Moreover, it was developed by the Renault Sport department, the same team that was already famous for producing the Clio RS and, of course, the Formula 1 engines.

At the front, the RS version received a different bumper than the rest of the Megane range, with a wide lower grille needed to cool the intercooler and engine. Instead of adding some overfenders on the wheel-arches, they replaced them with new ones, and the same went for the rear ones. From its sides, the windows formed an arched line that started from the A-pillars and went on to the C-pillars. In the rear, Renault Sport made a new rear bumper to complete the sporty image and installed a dual exhaust in the middle.

Inside, the carmaker installed a full-leather interior with side bolstering fitted as standard, while it offered sports seats on the options list. The handbrake looked like an airplane throttle, with the locking button on the driver's side. Its keyless start and entry was also a standard feature. From the factory, the car came fitted with aluminum sports pedals. In the back, it was the same bench as in any other three-door Megane but with leather upholstery.

Under the hood, Renault Sport proved its value and made a turbocharged 2.0-liter engine that provided 225 hp. It was mated exclusively to a six-speed manual. As an option, Renault offered a limited-slip differential, a stiffened chassis, and a lower ground clearance with the Cup option package. 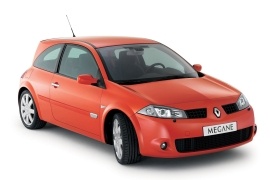