In 2006, Renault introduced a mid-life cycle refresh for the entire Megane lineup, and it couldn't leave aside its top-performance version, the RS.

While the rest of the range received the RS front suspension for better handling, the RS remained the same. They didn't have to improve anything on it, and it remained mostly the same vehicle as before.

Since the RS already sported specific body panels, Renault considered that it should replace only specific parts, which were common with the rest of the Megane range. Thus, the door-mirrors were black instead of body-colored. In the rear, there was a new set of taillights, which sported bigger reversing light lenses. Also, in the back, the bumper received a small refresh for its grille.

Inside, the carmaker installed a full-leather interior with side bolstering fitted as standard, while it offered sports seats on the options list. Its keyless start and entry was also a standard feature. From the factory, the car came fitted with aluminum sports pedals. In the back, it was the same bench as in any other five-door Megane. Along with the facelift, the Megane receive a new infotainment system.

Apart from the 225 hp engine provided since the 2004 model, Renault Sport introduced a tuned 2.0-liter turbo-diesel engine, which provided 175 hp. Thus, it entered the competition against the Golf GTD, which offered similar performances. 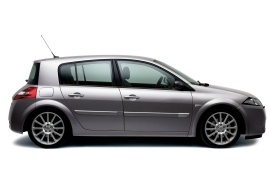