In January 2006, Renault introduced a facelifted version for the entire Megane range at the Brussels Motor Show.

Renault prepared a special package named GT for the three-door version, which aimed at those who wanted a sportier version of the Megane but not as hard-core as the Megane RS.

Like its siblings, it featured a new pair of headlights with clear lenses and a new, wide V-shaped grille above the bumper. In addition, Renault installed a secondary grille needed for the intercooler and the AC condenser in the apron. Finally, a pair of round foglights was added as a GT range standard.

Even though it didn't look like a true hot-hatch, the Megane GT Coupe featured a few distinct design elements inspired by the RS. Thus, the flared front wheel arches and the five double-spoke, 17" light alloy wheels differed from those from the rest of the range. In addition, the blacked-out B-pillar and the arched window line created the impression of a sporty vehicle, while a dual exhaust under the rear bumper completed the image of a hot-hatch, even though it wasn't truly one.

Inside, the carmaker created a sporty ambiance, with polished aluminum pedals and high-bolstered seats. Yet the high seating position was not exactly desired by those asking for sporty compact vehicles. The silver rings around the gray dials with red needles were also inspired by the RS version.

But at the end of the day, it was more than just an aesthetic package. Under the hood, Renault offered a two-liter turbocharged gasoline version that could provide 163 hp (165 PS) or a 148 hp (150 PS) turbodiesel. Both versions were mated with a six-speed manual gearbox. 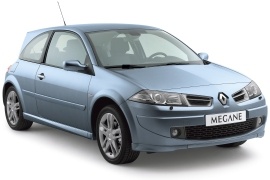