Renault unveiled the facelifted version for the Megane range in 2006, and, along with that, it introduced a special version named GT.

The Megane GT 5-doors was a mix between a regular family hatchback and a sporty vehicle. While it wasn't as potent as the Megane RS, it was still capable enough to keep up with other hatchbacks from the market. While it didn't have the most powerful engine available for its stablemates, it was still potent enough to pass as a hot-hatch.

Renault positioned the GT version between the Dynamique and Renault Sport models. It featured a unique front bumper with integrated fog lights on the outer side fitted as standard and a broad grille at the bottom. The main grille, above the bumper, sported the same "Bird beak" design with a vertical slat and the chromed, rhomboidal badge on it. From its sides, the 17" light-alloy wheels were standard, while at the back of the car, the designers installed a Renault Sport-inspired bumper with two exhausts in the middle.

Inside, the carmaker added more bolstering for the front seats and drilled aluminum pedals. A silver, metallic GT logo adorned the leather-wrapped steering wheel. In the instrument panel, Renault installed light-gray dials with red needles for the speedometer and tachometer.

But the carmaker went further than just some aesthetic improvements. It lowered the suspension by 10 mm (0.4") and installed stiffer springs and dampers together with the anti-roll bars on both axles. Under the hood, Renault introduced a turbocharged 2.0-liter engine which produced 165 hp for the gasoline version, or a 2.0-liter turbo-diesel, which provided 150 hp. Both versions were paired with a six-speed manual. 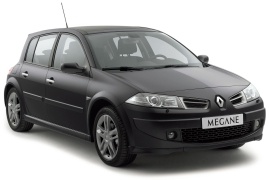