The third generation of the Renault Megane was unveiled in 2008 as a hatchback with three or five-doors.

Renault knew that if it wants to get a big chunk of the market, it had to come with a car priced lower than a German. It also had to make an Italian compact look dull next to it. Maybe the five-door version was not the best-looking compact car on the market, but the three-door version was better than its Italian competitor, the Fiat Bravo since Fiat didn't make a 3-door version for that. After two years into production, Renault tried to make things harder for its competitors and introduced the GT Line.

At the front, there was a specific bumper with a black, reshaped, lower grille. On the bumper's outer sides, the Coupe GT/GT Line featured individual housed fog lights. To amplify the aggressive effect, the Renault designers installed black headlamp backgrounds.

Inside, there were more features inspired by the sportiest hot-hatch of the moment, the Megane RS. It sported bucket seats with high bolstering on the outside. Renault installed an analog tachometer in the instrument cluster, unlike the rest of the Megane range that featured digital, LCD, ones. As for the engines, Renault installed a 2.0-liter turbocharged gasoline engine. Power went to the front wheels. For the drivetrain, the French carmaker asked the Renault Sport department to enhance the vehicle. As a result, the suspension was stiffer and the ground clearance smaller than a regular Megane Coupe. 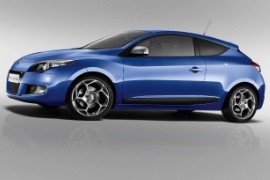