Renault introduced the fourth generation of the Megane Estate in 2016 and, apart from the rest of the range, it prepared a special trim level: the GT.

There was more than just a special color, rims, and aero package on the Megane Estate. The Megane Estate GT was the sporty station-wagon that could carry all the needs for a family but still be driven hard and offer plenty of pleasure for the one behind the wheel.

A surrounding daytime running light encircled the headlights, and that gave the car a distinctive personality. But that was not enough for the French carmaker that employed the Renault Sport division to somehow transform the station-wagon. The Dieppe crew worked on the front bumper and installed a new one with a different design for the lower side, where they added a lip to reduce the ground effect. Two grilles were placed on the exterior to mimic air-scoops for the brakes, where they put the fog lights. A mandatory roof-spoiler extended the roofline and made the airflow cleaner behind the car. There was nothing installed just for the look.

The interior revealed a different character of the car, with sculptured bucket seats for the front occupants. A big R-Link infotainment system was installed on the center stack. Next to the gear-selector, a special button with a flag showed started to raise questions about the car's character.

The drivetrain was different than the rest of the Megane Estate range. A 4-wheel steering system was installed, which helped the car get faster around the corners. The GT featured a standard, 6- or 7-speed automatic (dual-clutch) transmission with paddle shifters (depending n the engine). The launch-control mode was standard as well. 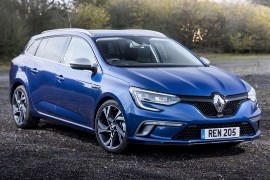