Renault unveiled the facelifted, open-top version of the Megane range in 2013 and started to sell it in 2014, promising an enjoyable experience by adding a new front fascia and more technology inside.

With the new Euro6 emission standards coming, the French carmaker had to make its move in the compact segment and introduced the refreshed Megane range. But it wasn't only the hatchback or the station wagon that went through this process. Even though the convertible market was not such significant, the carmaker kept its promise and brought the rejuvenated version of this model as well.

The new front fascia dropped the boomerang-style headlights from the Megane range, which lasted from 2010. Moreover, the front fascia sported a slimmer grille and a larger badge that took center stage. To help cool the engine, the carmaker added a wider grill in the lower bumper, flanked by the foglights' clusters. On the sides, there were little changes from the windshield to the back, but it installed tinted taillights. Also, the rear bumper was changed, adding a splitter in the lower center section.

Inside, like its predecessor, the Megane Coupe-Cabriolet offered room for four on a pair of bucket seats at the front and a bench in the rear. But unfortunately, there was hardly any legroom left for those seated in the back due to the retractable hard-top compartment. On the other hand, the driver was spoiled with an optional navigation system that could have been ordered and installed in the middle of the dashboard.

Under the hood, Renault chose to install a turbocharged 1.2-liter powerplant. The downsizing trend forced the French carmaker to do that, but it also offered a 2.0-liter naturally aspirated unit. Moreover, there was also a choice of turbo-diesel engines. 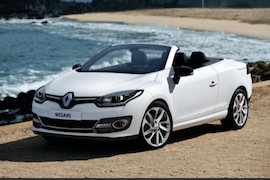