The Renault Megane Coupe-Cabriolet was the last addition to the Megane family and it was shown at the Geneva Motor Show in 2010.

It was the second generation of the retractable roof Megane.

The third generation of the Megane had a retractable hard-top, like its predecessor. It was the sixth bodywork offered for the French compact range. To add even more refinement, the top featured a glass over the front passengers.

This high-gloss finish black glass roof contrasted with the satin-effect chrome windscreen frame, while the sweep of the waistline. The dark red taillights featured a linear lighting pattern and LED brake lights for a distinctive rear lighting signature. The transformation from coupe to cabriolet and back took only 21 seconds, and it was completely automatically. The driver didn't have to lock or unlock some levers above the raked windshield.

The car interior was based on the Megane Coupe version, with a mixed instrument cluster of dials and a display for the speedometer. The navigation and infotainment display was installed on top of the dashboard, in the middle and it could be controlled via commands on the center console. The car featured standard Bluetooth connectivity and a USB connection for an MP3 Player.

Under the hood, Renault offered six engine choices mated to either a manual, a CVT, or a dual-clutch gearbox. 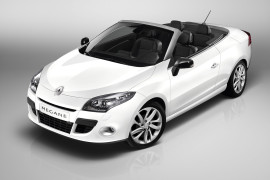