Renault introduced a mid-life cycle refresh for its compact segment contender, the Megane, which included the three-years-old Coupe-Cabriolet version.

While Volkswagen refreshed the Golf VI on the same platform as the Golf V and called it a new generation, Renault took another path. It introduced the 2006 facelifted Megane but with almost no changes at all. It took a keen eye for detail to spot the differences between a 2004 Megane CC and its 2006 sibling.

On the outside, the 2006 Megane CC sported body-colored plastic moldings over the bumpers and sides, black on the 2003 version. Other than that, the carmaker installed the same angular headlights that were continued on the same line with the black grille. On the lower side of the front bumper, the carmaker installed round fog lights as standard for the entire range.

Inside, the carmaker introduced a new navigation system as an option. That featured a retractable screen on the top of the dashboard. Renault just carried over its instrument cluster with silver rings around the speedometer and tachometer from its non-facelifted sibling.

Under the hood, the French carmaker matched the engine with the Euro 4 emission standards. There was a new, 1.5-liter turbo-diesel version that offered an excellent fuel efficiency. A new addition was the 2.0-liter turbo-diesel carried over from the Laguna lineup that provided 150 hp. 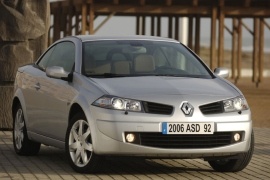