Launched in 2003, the Renault Megane Coupe-Cabrio was especially designed to replace the Megane Coupe, first introduced by the French company in 1996.

In contrast to other similar vehicles in its class, the Coupe-Cabrio has a newly-developed folding roof system which was especially designed by the German company Karmann for this Renault model. The Coupe-Cabrio had a choice of five engines, starting with a 1.6-liter 16V and ending with a 2.0-liter 16V turbo producing 163 horsepower. The first Coupe-Cabrio model was manufactured for only three years, the parent company replacing it in 2006 with an upgraded variant. 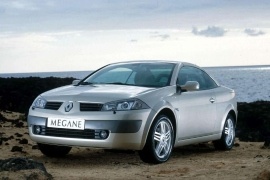