Renault introduced a facelift for the Megane's second generation in 2005 and, along with the five-door hatchback, the sedan, and the station wagon, the three-door version was upgraded as well.

Starting in January 2006, Europe switched to the Euro 5 emission standards, and Renault delayed the upgrade until the last moment. Actually, the French carmaker unveiled the facelift for the Megane at the Brussels Motor Show in January. But along with the upgraded engines, the rest of the vehicle received a few touches here and there to satisfy the customers.

Renault named the three-door version as Coupe, even though it was just a regular hatchback. The front fascia received the "bird-beak" design language introduced by Patrick le Quément. The sharp shape of the grille extended by the angular headlights resembled a bird's wings. In addition, depending on the trim level, the bumpers and the doors received either black or body-colored stripes. The car's profile revealed an arched upper window line that created C-pillars thicker on the upper side and very narrow on the lower area. At the back, the tailgate featured a bump on the metallic area, while the wrap-around windscreen formed a bubble shape.

Inside, Renault struggled to keep up with the rest of the carmakers and offered, as an option, a navigation system developed together with Tom-Tom. The instrument cluster received an improved TFT display placed between the tachometer and speedometer. Even though the car was advertised as a sporty vehicle, the high seating position and minimal bolstering areas didn't confirm that, although the carmaker offered the Megane Coupe also with the RS flavor.

Under the hood, apart from the Renault Sport version, the Megane Coupe received a choice of gasoline and turbo-diesel engines, which provided more power and better fuel efficiency than their predecessors. 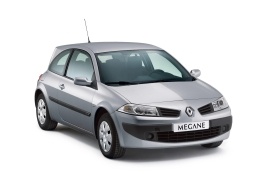