Renault introduced the second generation of its compact-segment contender Megane in 2002, and from the beginning, it offered it in two body shapes: hatchback and coupe.

Since they are French, they couldn't resist naming the cars in an unusual way. For instance, this so-called "Coupe" was nowhere near such bodywork. Instead, it had three doors, a vertical tailgate, and a classic two-box design. But in fact, the car was just a three-door hatchback.

The second generation of the Megane was a far cry from its predecessor. It was penned with angular lines and sharper edges, following the new-edge design concept. At the front, the "bird-beak" signature took center stage on the grille, flanked by a pair of air intakes that evoked a pair of wings. In addition, the angular-shaped headlights with corner-mounted turn signals provided much more light than the previous Megane. From its sides, an arched line followed the front and rear windows, with an unusual shape for the C-pillars, while at the back, the vertical tailgate featured a bump under the rear window.

Renault installed a pair of bucket seats at the front, separated by a center console where the gear selector and the handbrake were mounted. The latter mimicked an airplane throttle, and that was completely weird since the handbrake served to stop a vehicle, not lunching it. For the Megane, the carmaker offered the option of a keycard instead of a regular keyfob. The card had to be inserted into a designated slot on the center stack.

Apart from the RS range, which featured a unique turbocharged powerplant, the rest of the range was quite normal and adequate for every pocket. Also, a four-speed automatic was on the options list. 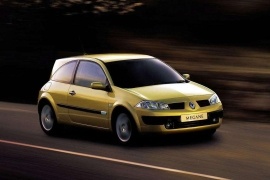