Renault refreshed the Megane range in 2006, improving the car's look and updating the engine range.

The Megane was a big success for the French brand, and the carmaker tried to keep that momentum by improving the compact-segment vehicle. Apart from the sedan, the coupe, and the convertible, the five-door hatchback was also refreshed. After all, it was one of the best-selling compact vehicles on the European market.

By 2006, Renault already had adopted a new front fascia for its products, introducing a sharper look for the bird-beak design concept. The half-grilles at the front formed, together with the angular headlights, wing-shaped elements. In addition, depending on the trim level, the bumpers and the doors received either black or body-colored stripes. Viewed from its profile, the five-door Megane didn't reveal any significant changes, but it received new alloy wheels.

The interior showed a new navigation system designed together with TomTom. Its retractable screen on top of the dashboard was unique on the market, at least in the budget car segment. For the lower trim levels, the Megane featured standard air-conditioning and a decent CD radio. The rear passengers sat on a split-folding bench.

Under the hood, Renault installed a choice of seven engines. Depending on the market, it offered a choice of manual or automatic gearboxes. 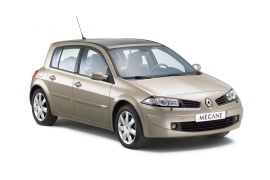