Renault introduced the second generation of the Megane in 2005 and offered it in a few shapes.

Yet, the five-door hatchback was among the best-selling versions of them.

The French carmaker was keen to attack its main competitor in the European market, Volkswagen Golf. For that, it needed a fresh approach. Thus, it came with a very strong safety package for its compact-segment contender, earning it a five-star score in the EuroNCAP crash tests.

Renault also dropped the fluid lines of the first-generation Megan and used the angular shapes and straight lines on the second generation. The front fascia resembled a pair of wings with the grille and the headlights following the same lines. In the middle, the bird-beak styling element supported the chromed badge. The lower bumper received an additional grille flanked by the optional foglamps to soften the angular shapes. In the five-door version, the C-pillars were vertical. At the same time, the tailgate featured a curved rear window above an extended, rounded back.

Inside, the carmaker introduced better materials than its predecessor, while the instrument cluster received a clean design with two large dials for the speedometer and tachometer. Moreover, an LCD took center stage between them. On the center stack, the carmaker added a silver plastic trim that surrounded the stereo and the climate control unit, while the slot for the keycard was placed lower, just above the center console. Thanks to the almost flat floor, the car provided enough room for five passengers, while the split-folding bench allowed the customers to increase the trunk space.

Under the hood, Renault installed a wide choice of engines ranging between 1.4- and 2.0-liter, either with gasoline or direct-fuel injected turbo-diesels. For specific versions, the French carmaker installed a four-speed automatic transmission. 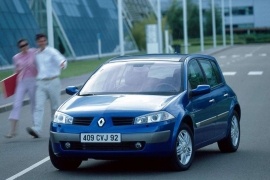