Renault made another step towards electric mobility by introducing the Megane e-Tech in 2021, after more than a decade since the launch of its first mass-produced electric vehicle, the Zoe.

Switching to electric mobility was not a big issue for the French manufacturer since it had the Japanese brands Nissan and Mitsubishi as partners, both very experienced in the EV segment. The Megane e-Tech was a major step for Renault since it was its first car built on the new CMF-EV platform. Thanks to the shorter engine compartment and fewer transmission parts, the Megane e-Tech received a 2.7 m (106.3”) wheelbase. It had the wheels pushed out in the car’s corners. The crossover stance was amplified by the tall door panels and short greenhouse. Its rear quarter panels featured a raised area on their upper side, forming a pair of shoulders for the car. Shod with a set of 20” light-alloy wheels, the Megane e-Tech looked ready for the next generation of vehicles.

Inside, the French designers created a squared, broad panel curved towards the driver seat. It offered a digital instrument panel in front of the steering wheel and a tall, portrait mode display atop the center stack. A few physical buttons still emerged at the bottom of that touch-screen. Thanks to the lack of a transmission tunnel, the carmaker managed to create a flat floor. Also, under the passengers’ feet, the CMF-EV platform featured a thin, 110 mm (4.33”) battery pack.

The Megane was available with a choice of two battery packs of 40 kWh and 60 kWh. 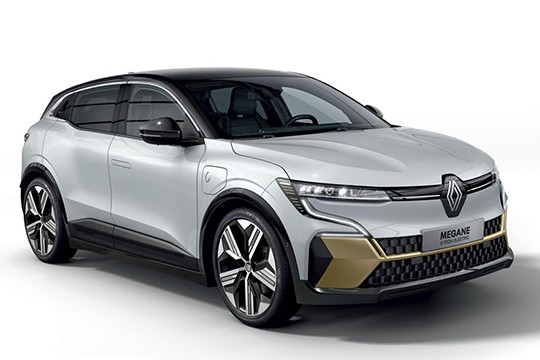