In the early seventies, the French carmaker Renault offered a very attractive vehicle for the small-segment: The Five.

It was the beginning of an unknown success.

It was in 1967 with Pierre Dreyfus asked his engineers to design a new small car that would be desired by a broad spectrum of the population, fit for all occasions and seasons.

The first supermini ever manufactured by the French carmaker, the Renault 5 was revealed in 1972 as a 3-door and 5-door hatchback.

The design was the work of Michel Boue, a 36-year-old stylist. Renault was impressed with Boue’s drawings and quickly authorized a development program. Unfortunately, the designer Michelle Boue didn’t get the chance to see its brainchild blossom as he died in late 1971, however, the final design was pretty much like his initial sketches.

The Renault 5 featured wraparound plastic bumpers that were a big thing in 1971. Developed by Prost-Dame, they were high impact-resistant and the R5 was parking-proof in every crowded city.

Most of its underpinnings were carried over from the popular Renault 4, such as the longitudinal-mounted engine that drove the front wheels. The powerplants were taken from the Renault 4 and the Renault 8, a 782cc with 33.5 hp and a 956cc with 44 hp, respectively.

The Renault 5 was very close to winning the European Car of the Year in 1973, however, the title was awarded to the Audi 80. 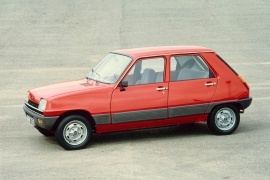 1 Renault Teases New Show Car for Paris, It's an Ode to the Iconic '4'

3 All-New Renault 5 Coming With Electric Power, Will Be Previewed by a Concept