The 2013 Ram 1500 was designed and built for light duties. It had more comfort features and even an option for air-suspension to increase ground clearance.

The RAM was the brand that was made after the Fiat-Chrysler marriage for the utility vehicles. For those who needed a light utility vehicle good as a daily driver and also as a partner for a handyman, the RAM 1500 was a good option.

The styling was a reshape after the 1993 Dodge Ram, with the front fenders lower than the hood. Its overall appearance was not of a rugged vehicle. In the Regular-cab version, it offered two doors and up to three seats. The 2013 model undergone a rather mild facelift than a new generation. A wider grille, LED turn-signals were among the few exterior changes. New for the pickup market was the active-shutter system that opened or closed the grille to help the thermal balance of the engine.

The Regular Cab was available with either a 6-foot-4" (1.95m) or 8-foot (2.44m) bed. For the front passengers, there was an option for two bucket seats instead of a bench. The infotainment unit featured U-Connect with either a 5 or an 8.4" touch-screen. Unique to the Ram 1500 was the optional RamBox feature, which places a pair of lockable compartments over the rear fenders inside the truck bed.

The standard engine was a 3.6-liter V6 unit mated to an 8-speed automatic transmission. The other two V8 engines were available with either six or eight-speed automatic. A V6 diesel was on the options list. Depending on the trim level, the RAM 1500 Regular Cab was offered with rear or all-wheel-drive. 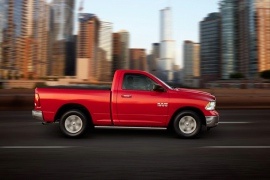