The Ram 1500 was praised and received a lot of credits for its fuel-efficiency, especially when it was equipped with the 2013 V6 gasoline engine. The Quad Cab only added more versatility.

There were more bodywork versions for the Ram, and the Quad Cab was for those who used the vehicle on a daily basis. Its design was massive with a big front fascia, with a taller hood than its front fenders. That made it look different than the other competitors. It featured active grille shutters to help heating-p the engine in cold weather and improve cooling it was hot outside. The Quad Cab featured a four-door body-on-frame construction with a bed in the rear. That bed was available with three box sizes - 5ft7", 6ft4" and 8 ft box. (1,73m, 1,95 and 2.43m)

The Ram 1500 pickup was a daily-driver pickup. It featured a comfortable ride, including an air-suspension, and 10 trim levels to choose from. The Quad Cab offered room for five passengers. It could be equipped with just basic workaday amenities or a fully loaded luxury cabin. The 8.4" Uconnect infotainment system was available on most trims.

The most important engine for 2013 was the 3.6-liter V6 Pentastar unit, that featured state-of-the-art technologies such as variable cam lifting and was awarded for its performance as the Engine of the Year. It was mated with either a 6-speed manual or an 8-speed automatic, that helped the fuel-efficiency. 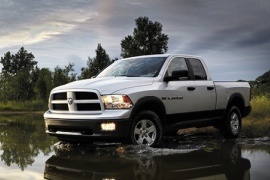