There was a mixed feeling about the Qoros 3 when it was shown at the 2014 Geneva Motor Show.

The good fit and finish were in big contrast with the unclear, and somehow bland, exterior design.

Soon after it was revealed and that the car will be offered in Europe, it was crash-tested. It was a test where other Chinese brands failed to get over two stars, on older and more permissive standards. But the 3 Hatchback from Qoros passed with flying colors

The most controversial theme of the Qoros was the design. The front headlights are close to what the Czech brand Skoda had on their Octavia compact-class sedan. The taillights were straight and around the corner, with the turn-signal on top of them. Above the tailgate, there was a roof-spoiler which incorporated the third brake light. Moreover, the connection between the C-pillar and the main body was similar to the same part of a BMW 3-Series.

Inside, the german inspiration was clear. It was unclear which brand's layout dominated more. For the upper part, the Audi A4 or the Volkswagen Passat B6 seemed the theme inspiration, while the climate control unit looked very close to a BMW 3-Series. That is not a surprise, since the Head of the design was the Gert Hildebrand, who worked for Opel and Volkswagen, and was General Manager of Mini Design.

The Executive Director of Vehicle Engineering was Klaus Schmidt, a former senior manager at BMW M-Power division. Qoros 3 was powered by a 1.6-liter naturally aspirated gasoline unit and a turbocharged unit that was under development when the car was launched. 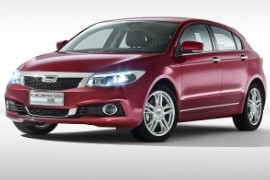