Designed and engineered on the same platform as the Quoros 3 Hatch, the 3 City SUV was launched at the 2014 Guangzhou International Auto Show.

In 2013, the SUV was shown as a concept-car named Qoros 3 Cross Hybrid. The production model though started with a 1.6-liter turbocharged gasoline engine. It was based on the 3 Series platform and it was the first Chinese car that obtained a 5-Star EuroNCAP score for safety. The first showrooms were opened at Bratislava, in Slovakia.

From the outside, the 3 City SUV was like a compact crossover with a hatchback shape. The design team was led by Gert Hildebrand, former head of external design for Volkswagen, SEAT and General Manager of MINI design, leading the MINI Clubman, Countryman and Coupe models. In 2011, Hildebrand joined the new Chinese Israeli joint venture Chery Quantum Automotive Corporation, now called Qoros, as Head of Design.

Inside, the Volkswagen influences were noticeable on the instrument cluster and the dashboard. Even the rotary knob for the lights had a similar design and was placed in the same position as in a Volkswagen. The infotainment unit featured an 8” touch-screen display and it was based on the Microsoft Windows Azure platform. It had an 800 x 480 screen resolution.

For the drivetrain, the Qoros 3 SUV featured a 1.6-liter turbocharged gasoline engine mated to a standard 6-speed manual transmission. A 6-speed dual-clutch transmission was available as an option. 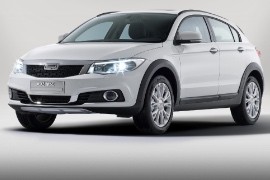