The Malaysian brand Proton started its production with licensed Mitsubishi cars and, in 2001, it dared to show their own product: the Impian.

It was a car designed and engineered by Proton.

At the time the car was made, Proton had the British car company Lotus in its portfolio. So, what the management did was to ask the Lotus engineers to work on the Impian. It was an interesting task since Lotus engineers were better in producing performance cars, not regular, family sedans. So, they did what they knew.

The Proton Impian was a three-box sedan, with a conventional look on the outside. The only styling extravaganza allowed to its designers was to install a triangular small window behind the rear seats. Thus, the C-pillars were not that thick. On the front, the hood was extended with another triangular middle section over the grille and it had the shield-like badge mounted on it. The headlights were typical for the '90s, but it was already 2001 and there was a new trend.

Inside, the Impian retained a simple layout of the dashboard, inspired by older Mitsubishi models. But the seats featured higher bolsters on their sides to support the front passengers while hard cornering. In the rear, there was room enough for three adult passengers. The 2001 model featured a standard air-conditioning unit, a Clarion sound system, and full leather seats and wood trims. Later on, the Impian/Waja was offered with less equipped models.

Under the hood, the Impian was offered with various engines supplied by Mitsubishi, Renault or in-house developed along with Lotus. The suspension was carried over from the Mitsubishi Carisma, but tweaked by Lotus for a firmer ride. But that was not good for a family. 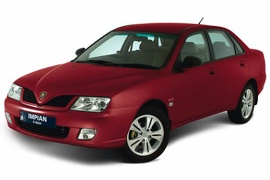