The Iriz was a real game-changer for the Malaysian car company.

Proton fitted the car with new options never featured before on a vehicle built by them.

Proton started as a company that built vehicles under Mitsubishi's license and evolved steadily to the point where it learned how to develop and build a car from scratch and made it well. The Iriz's platform was developed to allow further improvements and an electric version.

The small-class MPV featured a bold design with a silver bar on the base models' grille and chromed for the top trim-levels. The carmaker installed LED daytime running lights on the front bumper's outer pods for the 1.6-liter versions. The door panels were slightly shaped from their sides but not too sculptured and created a bland look. It's a design area where Proton still needs to improve. The rear was nicely proportioned, with the LED taillights on the inner side of the C-pillars. Proton installed a rear-view camera as standard for the 1.6-liter models.

Inside, the Malaysian designers tried to make a minimalist design for the dashboard, with curved surfaces and an infotainment screen placed on top of the center stack. The round knobs for the ventilation system were mounted lower than the screen. Despite its small length, Iriz offered room for five adults, even though those in the back shouldn't be too tall.

Under the hood, Proton installed two engine choices, with a 1.3- and a 1.6-liter displacement. Both were mated as standard to a 5-speed manual gearbox. For the 1.6-liter version, the carmaker offered a CVT on the options list. 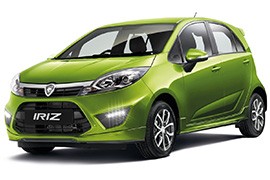