3 1986 Porsche 959 Paris-Dakar Got a Sympathetic Restoration, Still Has Its Battle Scars

The first production all-electric model with a Porsche badge, the Taycan is part of a 6-billion euro initial investment in electro-mobility from the German sports car maker. All Porsche Taycan versions are all-wheel-drive and feature two electric motors, one for each axle, which are powered by a large Lithium-ion battery. The Taycan Turbo and Turbo S are by far the most powerful models from the lineup.

As the first production vehicles with a system voltage of 800 volts instead of the more usual 400 or less in other EVs, the Taycan Turbo and Turbo S are also some of the most powerful road-going Porsches ever built. The Taycan Turbo develops up to 680 horsepower thanks to an overboost function and can accelerate from 0 to 100 kph (62 mph) in just 3.2 seconds while the model's range is of 450 kilometers according to the WLTP standard. The top of the range Taycan Turbo S has up to 761 horsepower with overboost, and in combination with Launch Control can go from 0 to 100 kph (62 mph) in just 2.8 seconds. Its range is slightly lower, though, with up to 412 kilometers being achievable with a single charge according to WLTP. Both models have a top speed of 260 kph and are powered by a 93.4 kWh Li-ion battery. 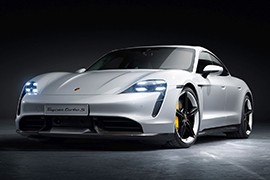