After four years from the introduction of the Panamera's second generation, Porsche introduced its facelifted version.

Some updates were required by new regulations and some for improvement's sake.

In 2013, Porsche started to offer the long-wheelbase version, named Executive, on specific markets with specific engine versions. Since the 2020 model year, it started to offer that option on more markets, and with an option for Sport Tourismo (shooting brake) as well.

For the 2020 model, the Panamera featured a redesigned front fascia, with a different bumper and lower apron. The previously optional Sport Design front end was featured as standard on the facelifted version. In the back, the revamped light strip ran seamlessly over the trunk lid, with an adapted contour and new LED taillights were installed. The three-piece retractable wing was kept.

The interior of the 2020 Panamera 4 featured the already known Porsche Communication Management infotainment system with a 12.3” touch-screen display mounted at the same level as the steering wheel, on top of the center stack. It featured the improved Voice Pilot online voice control and wireless Apple CarPlay. Porsche didn't say anything about the Android Auto connectivity.

Under the hood, the Porsche Panamera 4 featured a twin-turbo V6 engine, good for 330 hp. It was carried-over from the non-facelifted version. The 7-speed PDK (dual-clutch) automatic transmission was fitted as standard. 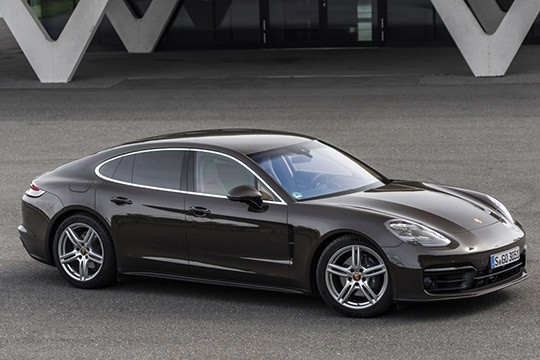 4 Porsche Cayenne Targa Is Half Luxury Crossover SUV Half 911 Sports Car, All Fake