In July 2018, Porsche unveiled a new facelift for the Macan range in Shanghai.

The production started the following month and the Europeans saw it at the Paris Motor Show in September.

The sales went well for the smaller Porsche SUV and new customers started to find their ways to Porsche dealers. Since the brand started to build vehicles for more tastes, it didn't attract only supercars lovers and racing maniacs. Its main advantage was an awesome heritage in the motoring industry and a high-quality product range.

The revised Macan featured standard LED headlights and a new design for the taillights, which were LED as well. The new apron with a wide design for the grille made the car look wider than it was, enhancing the sporty look.

The interior was slightly enhanced with the introduction of an 11” touch-screen infotainment display on the center stack. It was fitted with the Porsche Communication Management, which was Apple CarPlay compatible. The biggest improvement was on the technological side, where a new traffic assist function helped the driver in traffic jams. Not only that it kept the same distance with the car in front, accelerating and braking, but it kept its lane as well.

Under the hood, the 2018 Macan featured a revised 2.0-liter turbocharged engine from Audi. It was offered in two power outputs. Both of them were paired with a 7-speed PDK (dual-clutch) automatic transmission. The most important update was the gasoline particulate filter, which reduced emissions. 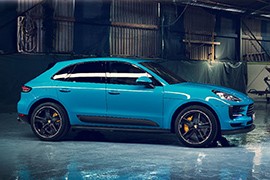