Over the years, Porsche offered a GTS version for most of its vehicles and the three magic letters stood for Gran Turismo Sport. These kinds of cars were built for long distances traveled in comfort, but with performance drivetrains. For the Taycan, that performance meant not only an under four-second 0-100 kph (0-62 mph) time but also an over 500 km (310 miles) of range for long travels.

At the front, it was the same unmistakable front fascia as its four-door GTS sibling. The apron featured black accents, door-mirrors casings, and window trims. A panoramic roof was an option with a liquid crystal film that changed from clear to matt at the touch of a button. A roof spoiler adorned the raked-forward tailgate at the back, thus enhancing the car's aerodynamic coefficient. However, unlike the regular Cross Turismo, the GTS version didn't sport off-road accents such as the black wheel-arches flares claddings.

The interior offered more headroom for the rear passengers, thanks to the extended roofline. The entire dashboard was a dual-screen system, one for the instrument panel and the infotainment. Apart from those, Porsche's designers added another touch-screen on the center stack's sloped side for the climate control functions. In the back, Porsche installed a split-folding bench profiled for two but with three headrests. It could expand the trunk area up to 1200 liters (42.3 cu-ft).

A standard adaptive air suspension ensured not only a comfortable ride but also enhanced road holding. 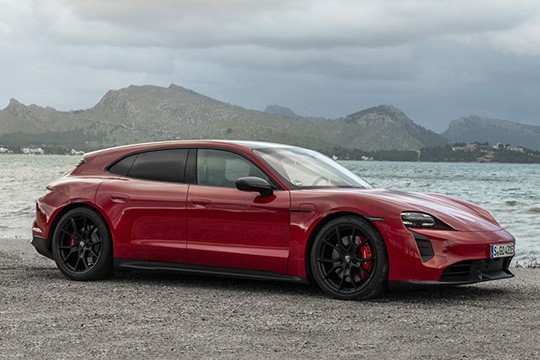