4 1986 Porsche 959 Paris-Dakar Got a Sympathetic Restoration, Still Has Its Battle Scars

It was the fastest version of a Cayman from its era. It was built to destroy competition over the race-track and to bring a huge smile on its owner's face and get closer to the super-car territory.

Not too much time before the Cayman GT4 was launched, a 4.4-second car from 0 to 100 kph (0-62 mph) was considered a supercar. The 2009 Ferrari 360 could top the same mark in 4.9 seconds and it was considered a supercar. The GT4 was not just a Cayman with more power. It was the most extreme Cayman to the release date. The car was produced by Porsche Racing Department.

In the front, a lower lip along the apron the big wheels, and the adjustable rear wing in the back were just the warning label. An exhaust scoop was placed on top of the front bumper, to extract the air after it cooled the front radiators. The side air-intakes for the engine were bigger than on the regular Cayman. Through the big, 20”, light-alloy wheels, the Porsche Ceramic Composite Brake discs were exposed.

The interior was not that different from a Cayman S fitted with a manual gearbox. The light race-bucket seats and the Alcantara materials used on the dashboard were a sign of quality.

The drivetrain received the engine from the Porsche 911 Carrera. It was a turbocharged flat-six that offered 385 hp and it was mated exclusively with a 6-speed manual. The rear-differential lock was a standard feature. With all the enhancements provided, the Cayman GT4 could lap the Nurburgring race-track in 7 minutes 40 seconds, a time which placed it in the same second with Lamborghini Murcielago (640 hp) and faster than a 2012 Chevrolet Camaro ZL1. 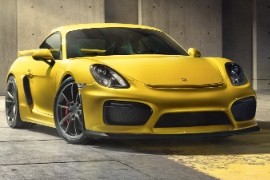