When launched in 2002, the Cayenne attracted as much hate as positive reviews from around the world.

It was the first Porsche SUV and it could host five adults without any problems.

It was inconceivable for a Porsche fan to accept an SUV from the famous sports-car manufacturer. But the car was needed. The German brand needed a car to sell in volumes and save them from a foreseeable financial collapse. Despite all the odds, the Cayenne was well received by the market.

The exterior look was inspired by the 911, with headlights that resembled those installed on the 911 - 996 version. The tall greenhouse, for a Porsche, was designed according to the car's destination: as a family sports SUV. The Cayenne S was designed to be a sportier version for the base, 3.2-liter Cayenne. In the back, a dual exhaust system was installed and an aluminum shield was seen under the bumper.

Inside, the gear-selector was carried-over from 911. The instrument cluster and the keyhole were inspired by the famous German sports-car as well. A tall center console separated the front passengers. The power-adjustable leather front seats were accompanied by the rear leather bench, which featured a split-backseat to extend the trunk space. The Cayenne S featured a CD-radio with 12 speakers. A Porsche Communication Management (PCM) infotainment unit with navigation and a backup camera was available.

Under the hood, the Cayenne S featured a 4.5-liter V8 with a dry-sump lubrication system, which was an unusual technical solution for an SUV. It was paired to a 6-speed manual. A 6-speed automatic was on the options list. 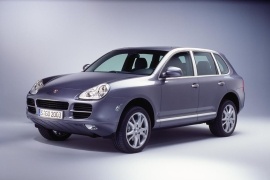