Usually, when a manufacturer makes a concept-car, that one is faster or better than the road-going version.

With the Carrera GT things were different. The prototype had a 5.5-liter engine and the street version was 5.7 and had more power. The Carrera GT prototype was shown at the 2000 Paris Auto Show to attract people towards the new Cayenne. But in the end, enthusiasts asked Porsche to build the concept car. And so they did, and they did it well.

The Carrera GT has the engine developed for endurance racing and re-worked for street use. The transmission is a 6-speed manual only with a multi-disc clutch to reduce its diameter. The gear knob was made out of wood to remember the old racing Porsche and it was replaced later with a carbon fiber one, to glorify the new era. The over 8000 rpm engine was a true masterpiece of road engines for Porsche. But the car had to be very carefully driven since it didn't have stability control, it has a manual gearbox and a very tricky clutch.

Porsche said that it will build 1500 units. But only 1270 were made. The change of safety regulations banned it for production. So it ended in 2006. And it wasn't the USD 450.000 bill that killed it, but the U.S. regulations regarding the airbags. 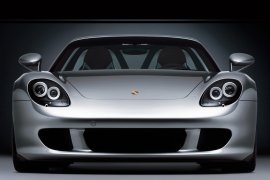