1 Floyd Mayweather Splashes $330K on a New Car and No, It's Not a Rolls-Royce

5 Meet the Man With 50 Porsches in His Garage, His Life-Long Passion Began With a 911

The Turbo version didn't want to be subtle at all. Unlike the Carrera RS, which was a stripped-down Carrera 2 with few more ponies from the flat-six engine, the Turbo showed its muscles and it had the power to talk the walk.

From the outside, the flared fenders, wider than the regular Carrera, and the whale-tail in the back, were no subtle at all. They looked mean and they meant business. The special wheels were similar to those found in the Carrera RS. The front bumper looked slightly different than the rest of the range, with a lower apron. In the back, two exhausts were mounted on the outer part of the bumper.

Inside, the owners of the previous generation noticed more similarities with the old generation. The main differences are for the safety systems. The 964 was fitted as standard with dual airbags, for the driver and front passenger. In the back, there were two small (very small) seats. The five dials for the instrument cluster featured a black background. The leather, power seats, were a standard fit for the car. The rear seats were more useful as a parcel than to keep an adult there.

The engine was a re-worked 3.3-liter unit, turbocharged. It offered 320 hp and it was mated to a 5-speed manual only. It was the last Porsche Turbo with rear-wheel-drive. 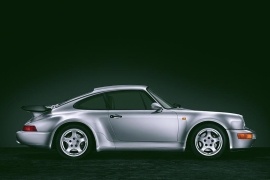