4 Porsche 911 Facelift Gets Spied in Cabriolet and Coupe Forms, Both Share Digital Dash

5 2024 Porsche Taycan Allegedly Has 1,000 Horsepower, Gets Spied During Winter Testing

Sometimes, a car-manufacturer builds a car not with its regular engineers, but with the race-engineers. And when the work is done, they kindly ask their colleagues from the road car department to make the car legal enough to be registered.

The 2016 Porsche 911 GT3 RS had the maximum race-required features to be a serious contender on the track. The front splitter, the front fender air-vents, and the massive rear spoiler are all providing downforce to keep the car planted on the road. The rear wing, for instance, provided a load of 220 kg (485 lbs) at 300 kph (180 mph). The hood is made out of CFRP (Carbon-fiber Reinforced Plastic) and the same goes with the front fenders.

Same weight reduction went on the inside, where the rear seats were replaced by a roll-cage and the front seats are made out of carbon-fiber with Alcantara upholstery. It still had air-conditioning, an infotainment system, and few comfort features, so the driver could drive the car to the race-track and back, and not hauling it on a platform.

Under the rear lid, the 4.0 liters engine was a marvelous technological achievement. The flat-six was naturally aspirated and provided 125 hp/liter. Thanks to its internal components, with airspace (really) technology materials, the engine can revs up to 8800 rpm. It was mated to a special developed 7-speed PDK (double-clutch) transmission with specific functions such as "Pit-lane speed limiter" and de-clutch for instant disengaging any gear. 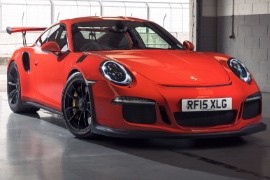