The Porsche 911 – 993 marked the end of the air-cooled engines for the Germans sports-car manufacturer. Due to new rules for pollution norms, they had to switch to water-cooled engines.

For some, the 993 generation was the last true 911. Even though after that the car-maker built faster cars, the 993 still had that specific Porsche sound. It was the mix between the old and new school, with enough comfort for a daily-driver car, and good performance.

The Carrera was the base model for the 911. It featured two round headlights, in the tradition of the Porsche brand. The flat and low trunk-lid in the front was lower than the fenders. The windshield was not very raked and the sloped back toward the end of the car made a curved line along with the engine lid. A rear spoiler was installed and it was automatically extended depending on the car's speed, or via a button installed in front of the gear-stick.

The interior featured sport-bucket seats in the front and two small seats in the back. The instrument cluster featured five dials, with the tachometer in the middle and a clock on the right side. The climate controls and the stereo were mounted in line with the steering column.

The engine was a completely reworked flat-six, with a 3.6-liter displacement. It was offered in two versions of power, depending on the market and manufacturing year. A newly-developed suspension system resolved the lift-off oversteer problem form the previous generation. It was offered with a 6-speed manual or with the Tiptronic (automatic transmission) with manual override for gear changes. 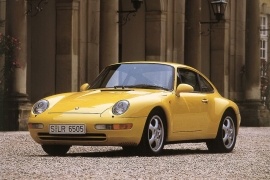